Sleep is imperative for every human, especially for women. So what do you think will happen when disorders like insomnia, sleep apnea or recent ones like tight schedule cause you to lose sleep? Well, the implication is very simple; it affects your healthy life, particularly your heart.

The importance of sleep can never be overemphasized, the 8-hour sentence in a useless void, the research is pretty clear on this point: sleep is sacrosanct for healthy living. It helps the brain, mood, keeps you sharp, strengthens your immune system, fights inflammation, and keeps your heart and blood vessels in tip-top shape.

Shelby Freedman Harris, PsyD, Director of behavioral sleep medicine at Montefiore Medical Centers Sleep-Wake Disorders Center in New York City asserted that, “When you’re sleeping you’re regulating hormone levels, you’re regulating insulin levels, your blood pressure is being kept under control, there are a lot of things going on, and if you’re not getting enough sleep you’re throwing these things out of whack. While you are sleeping, the body repair damaged tissue, produces crucial hormones, and strengthens the brain a process called consolidation, which helps you perform a new skill better after sleeping than you would if you spent an equivalent amount of time awake.

Virend K. Somers, MD, a professor of medicine and cardiovascular diseases at the Mayo Clinic in Rochester, Minn., who also studied sleep and heart health stated that “It’s a way for the body to integrate everything that happened over the past waking day and to kind of prepare for the next day.”

A Healthy heart requires good sleep
Women who get less than six hours of sleep a night, as well as ones who don’t spend enough time in the deepest stages of sleep, are at higher risk of heart attacks and strokes than those who get at least seven hours.

A study in Japanese factory workers in 2011 found those who slept less than six hours a night had a five-fold increased heart attack risk over a 14-year span compared with those who logged between 7 and 8 hours a night. Another published in 2011 found that healthy women from 65 and above with normal blood pressure were nearly twice as likely to develop hypertension during the study if they spent less time in the deepest sleep stage (known as slow-wave sleep) compared with those who spent the most time deeply asleep.

There’s also some limited evidence that short-term sleep deprivation may be harmful to those with heart problems. In 2012, Swedish researchers reported that hospital admissions for heart attacks increased by about 4% in the week after the spring transition to daylight saving time compared to other weeks. This is when we “spring forward” and set our clocks an hour ahead, meaning many of us to lose an hour of sleep.

Charles Czeisler, MD, the Baldino; Professor of Sleep Medicine at Harvard Medical School in Boston on sleep apnea stated “It’s as if somebody’s choking you, so your heart rate goes up, your blood pressure goes up, and instead of having a daily cycle in which everything slows down at night, instead everything is higher during the night. Over time, even your daytime blood pressure is higher.” In fact, he adds, many experts think sleep apnea may account for one-third of all cases of high blood pressure among adults.

When you feel you have not rested enough during the day and your bed partner says you snore, you should ask your doctor about sleep apnea. According to Dr. Somers “There is enough evidence out there suggesting that sleep apnea is bad that people need to take it seriously.”

Shelby Freedman Harris stated that women with less severe sleep apnea may be able to get their symptoms under control by just adopting strategies that prevent them from sleeping on their back, for example sewing a tennis ball into the front pocket of a T-shirt and wearing it backward. There are even shirts that you can buy with built-in padding to prevent back sleeping.

For more severe cases, a device can help prevent the lower jaw from falling backward into the airway, Dr. Somers says, or a face mask that delivers pressurized air into the nose (called continuous positive airway pressure, or CPAP) can keep the airway open at night.

Can less sleep make you fat?
Research has suggested that a lack of sleep could be contributing to problems like diabetes and weight gain- both serious health concerns. Some studies have linked shorter sleep to a greater likelihood of obesity, but whether or not sleeping less is a cause or effect of obesity remains unclear.

It is common knowledge that sleep deprivation reduces sensitivity to insulin, the key blood-sugar-regulating hormone while making it harder to metabolize blood sugar properly. Short sleep also boosts levels of hormones that make us hungry, while reducing secretion of the hormones that help us feel full. So it makes sense that being starved for sleep could lead to weight gain even if only for the fact that being awake longer gives you more time to eat.

Dr. Czeisler asserted that women who sleep less but eat more, their blood sugar goes higher and they are more resistant to the effect of insulin than if they ate the same cookie after a good night’s sleep, says. “If you are on a diet to lose weight and you’re sleeping five to six hours a night, 75% of the weight you lose will be lean body mass.”

That means just 25% of the weight you’re losing is fat, he added; when people sleep enough, fat accounts for 50% of weight loss.

Freedman Harris stated, “A lot of women who don’t get enough sleep often say they have trouble losing weight, or they have this slow weight gain.”  Often, she further stated, women who start getting treatment for sleep apnea to find that once they are sleeping better, it is easier for them to lose weight and losing weight may help lessen sleep apnea symptoms. “You don’t have to be overweight to have sleep apnea, but if you are, sometimes losing at least 10% of your body weight can reduce the severity of your sleep apnea.”

Ways to get a sufficient night’s sleep
Once you are in bed, prepared for a healthy seven or eight hours and then stare at the clock for four of them. Is all lost? If you have trouble sleeping for a few days here and there, taking steps to improve your sleep should get you back on track. And you can be assured that you have plenty of company. According to the National Sleep Foundations, 2011 Sleep in America Poll, 60% of U.S adults say they have sleep problems every night or almost every night.

Any woman who finds out that she is having sleeping problems should, first of all, take a careful look at her sleep hygiene, asserted Dr. Harris. This means organizing your surroundings and activities to promote sleep as bedtime approaches. Skip caffeine after noon, she advises (and do not forget that diet soda, herbal teas, and chocolate can contain caffeine too). Avoid alcohol or heavy meals within three hours of bedtime. “Exercise is great for sleep, especially falling asleep,” she added. You’ll get the most benefit by working out five to six hours for bedtime. A hot shower or bath about an hour and a half before bedtime can also be helpful. 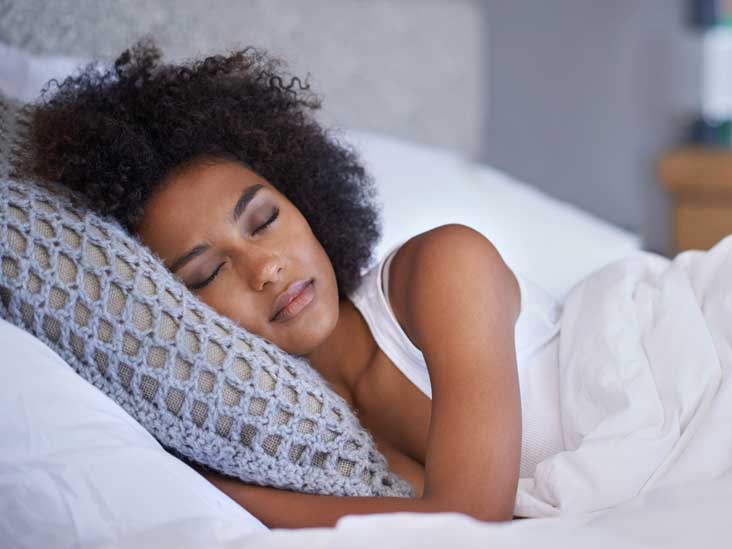 “If you cannot sleep, get out of bed, go somewhere else, do something quiet, calm and relaxing, go back to bed when you are sleepy again.” Go to bed and wake up at the same time within a half hour every day.

Dr. Somers warned against making your Facebook, I-phone, or TV your final destination of the evening. Using these devices for communication is clearly eating into our sleep time, says. “People are spending more time being connected than sleeping.” Texting friends, playing computer games, or just watching TV stimulates our brains and bodies at a time when we should be winding down, and the extra light we expose ourselves to when we peer at a screen could be throwing off our body clocks.

This is because when it gets dark, our bodies release a hormone called melatonin that helps make us sleepy, and pre-bedtime bright light exposure especially exposure to the blue light emitted by screens large and small weakens melatonin release. “I have heard a lot of patients say, I’m just watching YouTube videos on my I-Phone at night.” “It might be calming, but it’s actually doing something to the melatonin in your brain. I usually tell people to cut off screen time an hour before going to bed.”

Women with long-standing, chronic insomnia need more than a sleep hygiene tune-up. A few sessions of cognitive behavioral therapy (CBT), a type of counseling designed to help people change the way they think about challenging situations like insomnia and respond more positively to them, can be helpful. Four to eight sessions are usually enough.

Virend Somers stated, “In the sleep field we actually recommend that patients do that first because it’s short-term and it’s better than getting hooked on a pill.” However, if CBT doesn’t help, medications may be necessary. “They have a place certainly, but they need to be used carefully and thoughtfully.”

“The best way to be sure that you are sleeping enough is to wake up spontaneously without the use of an alarm clock and to feel rested when you wake up. If those things happen and you are not feeling sleepy during the day, then you’re probably sleeping enough.”

Getting enough sleep plays an important role in good health and well-being throughout your life. Proper quality sleeps at the right times can help protect your mental health, physical health, quality of life, and safety.