Growing up was a bitter sweet experience for the little Helen Oritsejafor. She had a loving and caring father who pampered her and she lacked for nothing. The pain of losing her mum at an early age and a dear cousin who took ‘’her death’’ tinted her childhood memories with some great sadness.

Mama Helen as she is fondly called encountered God at a very tender age, and  sure knew she will be used in God’s vineyard. Marrying a renowned man of God however was a dream she would have considered lofty. She dropped all her ambitions, wealth, and political status to support her husband, the renowned Rev. Ayo Oritsejafor in the ministry.  She has no regrets, and will do this over and over again.

Amazons Watch magazine crew met with her in her Warri office where she took us on a journey of the coincidences that triggered up this great and amazing relationship.

Please tell us about your background and some of your experiences growing up as a girl.

My name is Helen Aduola Oritsejafor. I am a Pastor and I am mostly called Mama Helen. I actually came from Addo-Ekiti. My father is from Addo-Ekiti and my mom is from Ondo State. My parents were both great educationist. My father had a school assisted by my mother and the school turned out to be one of the best schools at that time.  My mom had five of us and she passed on after the fifth child. So, my father had to remarry and also had concubines, so you can officially say that I am from a polygamous home. Growing up without a mother was quite challenging. Evidently, every child would love to have the love of a mother. My father had to play the duo role of being a father and a mother. He was a wonderful man; he loved people. I would always reference the fact that I learnt so many things from him, especially when it has to do with being a philanthropist. My father became father to many children who were not biologically his, through philanthropy.

When I was eight years old, I had an experience that was incredible. I, alongside my siblings and cousins were invited to a ceremony. A family friend had a baby and we were invited over to celebrate with her.

I was just about to enter the house when the woman of the house approached me and said I have a special plate of rice with big chicken for you. As a child of 8, it was quite exciting to be singled out among my siblings. So by the time I got to where the food was set out, just trying to pick the plate, a hand pushed my hand over and led me to picking another plate. I couldn’t resist the hand. I heard this voice:  “don’t”. My cousin who was by me ate the food. But by the time we got home, she started convulsing. It was a dramatic moment. I am sad to say she died. She took my death. Anytime I think about it, I feel teary because it was such an experience for an 8-year old girl.

Kindly visit this link on our website at  www.amazonswatchmagazine.com to read the full interview.

Commitments toward formally educating girls in northern Nigeria dates back to almost seventy years. And from the mid–eighties to date, there have been more than 10 government policies, mandates, and programs, made to improve and encourage girl child education. What are the effects of this age long commitments on recent statistics and how are Northern Nigerian women faring?

Amazons Watch magazine had an exclusive interview with Dr. Mrs. Hannatu Adamu Fika, Executive Secretary /CEO, Federal Government Staff Housing Loans Board, Nigeria, where she bares her thoughts on the issues ranging from the education of Northern  women, leadership and stories of her travails and achievements in her journey to the top of Nigeria Civil Service.

Dr. Fika is audacious and unrelenting in the pursuit of her dreams.

Click on this link to  read her inspiring story. 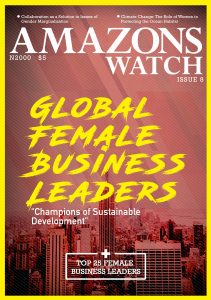 Click here to view the PDF format of the magazine

Click below to view the PDF format of the magazine

Click here to view the PDF format of the magazine