Events are a reason for people to come together and celebrate; people either celebrate progress or in remembrance of past experiences, usually held on a yearly basis. This gives attendees ample time to prepare and come with their best at the next edition.

One of such annual events is the Winter Light Festival. This event is usually organized by different cultures in different parts of the world. The winter light festival is always celebrated to mark the end of the winter and beginning of the light season. Most times the event is marked with a huge showcase of art, workshops, light designs, live music, and street food.

At the earlier times of this celebration, it was revered as a religious and spiritual gathering to celebrate the end of a dark period in a year and the beginning of the days of light. It was celebrated as a moment of rebirth of the spirit and mind, with each religion celebrating it differently.

In the Hindu religion, the essence of light is symbolized with equating everything in existence with a divine quality as well as the illumination of the mind. While in Judaism, light is signified as a symbol of the good and beautiful and is seen as an emanation of a different essence from the other side of reality. The Judaists mostly celebrate the Hanukkah as the principal festival of light. For the Buddhists, light is seen as the presence of God within all human and the wisdom that dispels ignorance.

In celebrating the winter light festival, the Nabana no Sato festival held in the Mie Prefecture, Japan is usually the best display of winter illumination that can be seen across the country. The Nabana no Sato is a park that is entirely dedicated to flowers and is located on the island of Nagashima in Kuwana City. The park is famous for its seasonal flower shows which takes place all year round with the winter light festival being held generally from the end of October to the end of March in the next year. This year, the Winter Light Festival in Nabana no Sato will take place from October 25, 2018, to March 31, 2019. This means that the sight can also be enjoyed during the month of February which is the month of and a good sport for couples to hang out.

The Nabana no Sato is a botanical theme park which features carefully planned landscaped gardens and impressive giant greenhouses. During the spring, the park is decorated with an array of colourful flowers, blossoms, and cherry trees, including multiple rows of tulips, pansies, viola, stock, and daisies.

In celebrating the winter light festival, the park is beautifully illuminated with over eight (8) million LED lights and turning it to sight straight out of a fairy tale. Usually, the theme of the display changes yearly and also has also featured spectacular LED-illuminated models of objects in nature like Mount Fuji, the Niagara Falls, the Swiss Alps, Northern Europe Aurora’s show model, and the Kumamon, which is depicted by a black bear, Kumamoto Prefecture’s superstar mascot. The light bulbs are always charged via solar panels to reduce the impact on the environment since they will be on for a particularly long period of time.

One breathtaking part of this festival is the 200-meter-long light tunnel that is usually covered with over 1.2 million light bulbs. The bulbs will represent a tiny flower and together, the lights draw a beautiful part along the park. The park has also added recently the Kawazu Sakura light tunnel which 100-metre-long with around seven hundred thousand pink LED bulbs to resemble the Kawazu cherry tree. This tunnel has become especially popular with the couples that come for the winter light festival.

The fragrance of the flowers mingles with the cold winter air as visitors walk and enjoy the famous Tunnel of Lights which will always be accompanied with elegant light shows and designs that blanket the entirety of the theme park and its waters.

Now, because there is obviously going to be a lot of walking to admire the sight of the park, there is an Ashiyu foot bath (a Japanese public bath in which people can bathe their feet) available for visitors to use free of charge. The spa is made from a contained underground natural spring. 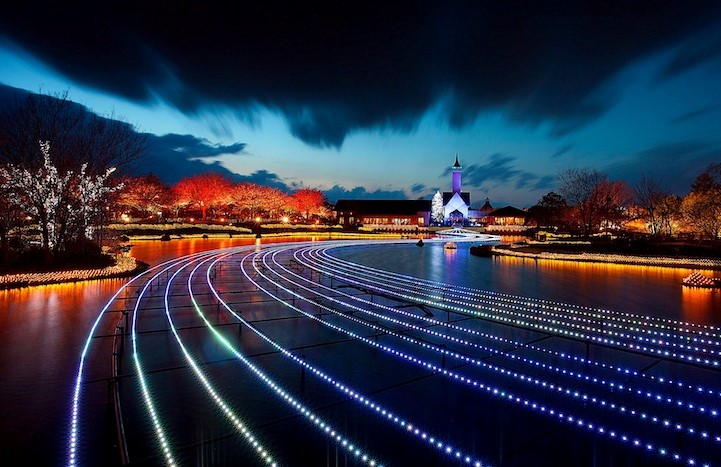 The winter light festival in Nabana no Sato provides visitors with the right ambience to truly appreciate nature as well as enjoy the comfort and company of their loved ones. While the garden is open all year round to visitors, visiting the garden during the winter festival will truly give you the most breathtaking sight have ever seen.