If you want a taste of what ordinary Egyptian families eat at home, you can’t go wrong with koshari (variously spelled koushari and koshary), a nourishing vegetarian dish of rice, lentils, macaroni, garlic and chickpeas, bought together by a spicy tomato sauce and topped off with fried onion.

A good koshari can send an Egyptian into raptures, and it’s also hugely popular as rib-sticking street food and take-away.

Koshari is the national dish of Egypt.  It is served in virtually every Egyptian restaurant, in every Egyptian home, and on every Egyptian street corner.  Street vendors serve the dish from carts to people eagerly waiting in line to eat this beloved and highly popular dish.  The mixture sounds strange…until you taste it.  Then you’ll know why this dish is a favourite among Egyptians.

Egyptians and tourists fondly speak of the “Koshari Man,” the title bestowed upon street vendors who sell the dish from their carts.  Aziz Awad, who used to be a Koshari street vendor and now works at a downtown restaurant, describes it this way:  “The Koshari man grabs a bowl, and scoops a little of each ingredient into the bowl….Each dish takes about five seconds to assemble. His speed can be surprising.

Every Egyptian knows and recognizes the sound of Koshari being made from down the street.  Though it is Egypt’s national dish, it isn’t actually Egyptian in origin.  Neither rice nor macaroni is indigenous to Egypt.  It is believed that Koshari originated in India and dates back to the time of British Colonization.  The name “Koshari” is actually from the Hindu “khichri”, which refers to a dish of lentils and rice.  When the British arrived in Egypt in the late 1800’s they brought this dish with them – it was inexpensive and filling.  It didn’t take long before the dish was enthusiastically embraced by the Egyptian people.

The crowning aspect of this dish is the flavour-packed, spicy tomato sauce.  It’s made with a special spice blend called Baharat (Arabic for “spice”), an all-purpose spice blend commonly used in Middle Eastern cuisine.  Just a pinch adds depth and flavour to sauces, soups, stews and meat.

Note: Prepare the rice, macaroni and lentils while the sauce is simmering and leave them covered in the pots to keep warm. 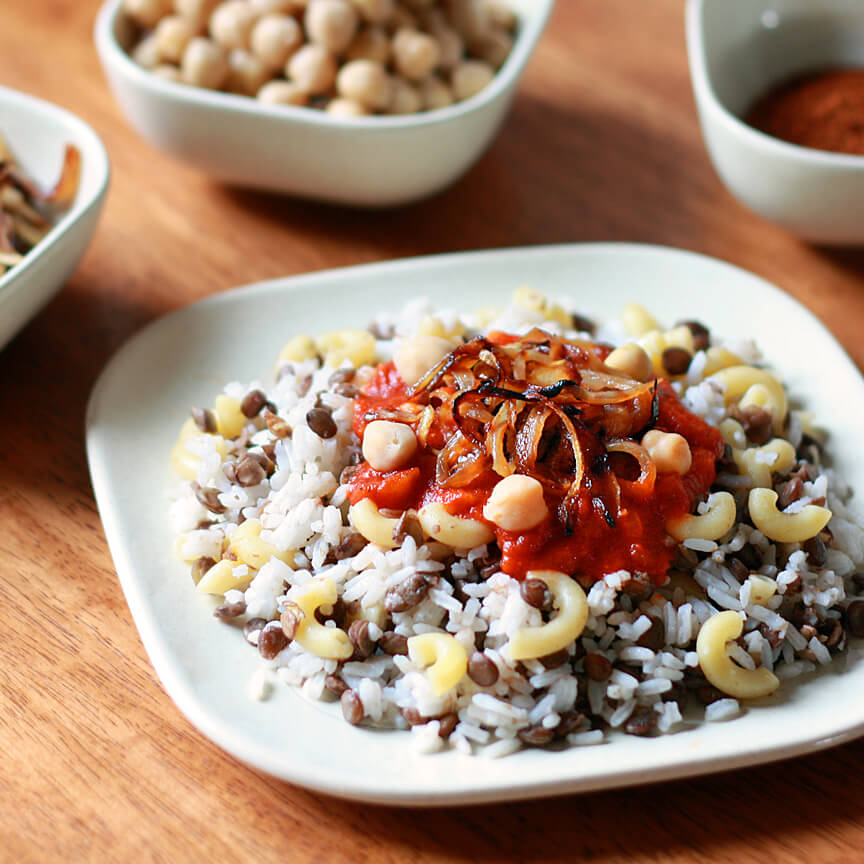 To make the sauce: