Food forms part of Africa’s cultural heritage. With a deep sense of hospitality, one never want to miss the royal treatment given to a visitor in an African country. Amongst the choice and richly nutritious dishes scattered around the continent, staple dishes form a large percentage of the list. In this article, we shall be sharing some of the unique staple dishes- something I like to call “pounded and mounded” dishes. 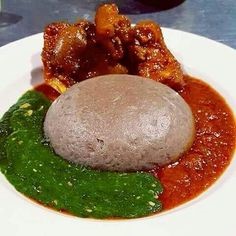 Plantain flour also known as elubo ogede and Ewedu soup is made from unripe plantain and matched ewedu leaf. This dish is synonymous with the Yoruba ethnic group in Nigeria.  The plantain is peeled, dried and grinded then poured into boiling water to become amala ogede, light brown in colour when cooked.It is eaten with the Ewedu soup; a green and sticky soup made from whipped jute leaves. The leaves may also be called ayoyo or saluyot leaves (corchorus olitorius )in other parts of the world.  Ewedu isn’t served alone. It’s often served with stew or gbegiri. The low carbohydrate level in plantain flour makes it a good food for diabetic patients and others who need a low-carbohydrate food. 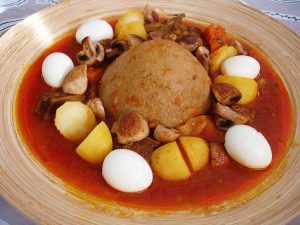 Bazin also referred to as bazeen is an unleavened bread in the cuisine of Libya prepared with barley, water, and salt. Bazin is prepared by boiling barley flour in water and then beating it to create a dough using a magraf, which is a unique stick designed for this purpose.The dough may then be placed in a pan and allowed time to harden, after which it is baked or steamed. The salt contributes to the hardness of the bazin. Bazin may have a paste-like and hardened texture.

Bazeen is typically served with a tomato sauce, eggs, potatoes, and mutton. This preparation method involves shaping the dough into the shape of a pyramid or dome, after which it may be served with a tomato-based soup or meat and potato stew poured atop and/or around it and garnished with hard-boiled eggs. When consumed, bazin may be “crumpled and eaten with the fingers.” It is typically eaten using the right hand and may be consumed communally. Bazin has been described as a traditional dish and as a national dish of Libya. 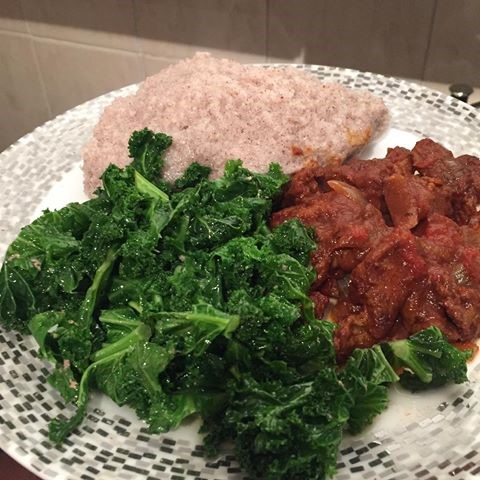 Sadza is a cooked cornmeal which serves as one of the major staple foods in Zimbabwe and other parts of Southern Africa.

Sadza is made with finely ground dry maize/corn maize (Mealie-Meal). This maize meal is referred to as hupfu in Shona or impuphu in Ndebele. Despite the fact that maize is actually an imported food crop to Zimbabwe, it has become the chief source of carbohydrate and the most popular meal for indigenous people. Locals either purchase the mealie meal in retail outlets or produce it in a grinding mill from their own maize.

Sadza is typically served on individual plates but traditionally sadza was eaten from a communal bowl, a tradition that is still maintained by some families mainly in the rural areas. It is generally eaten with the right hand without the aid of cutlery; often rolled into a ball before being dipped into a variety of condiments such as sauce/gravy, sour milk, or stewed vegetables. 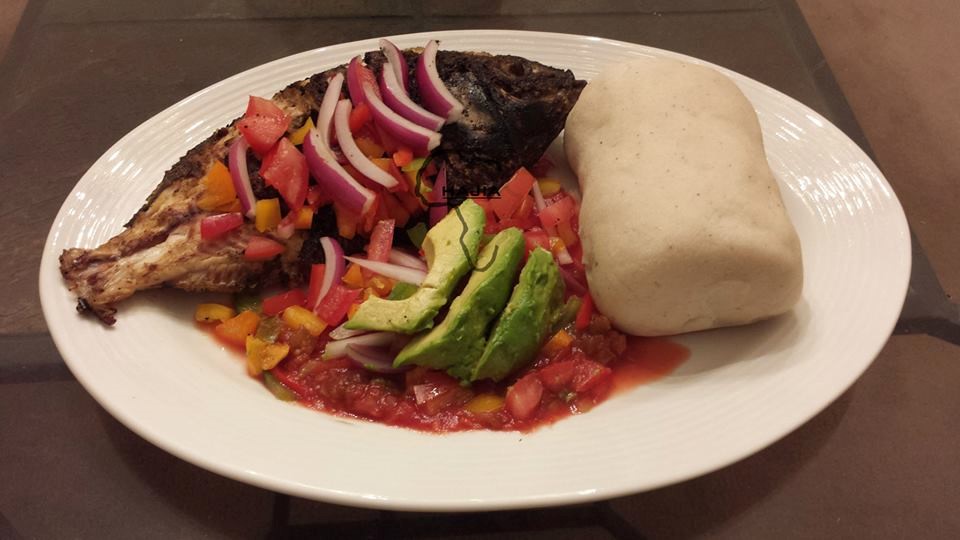 When you see fish being grilled on the streets of Accra it is most likely to be tilapia, a delicacy among Ghanaians, who spice then grill the succulent freshwater fish. It complements banku, a Southern mix of fermented corn and cassava dough, and very hot pepper, diced tomatoes and onions. Banku is one of the main dishes of the people who live by the Ghanaian coast.