The Zimbabwe delicacy called Sadza nema veggie ane nyama, is a two part recipe with sadza on one side and the accompanying stew on the other. Sadza is an African version of thick corn porridge produced from corn meal or maize meal and water so Sadza ne Nyama Ye Huku refers simply to Zimbabwean thick corn porridge with chicken or another meat stew. 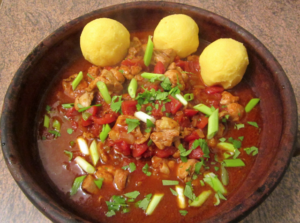 Sadza ne nyama (sadza and meat stew) or simply sadza is the staple diet for most of Zimbabwe’s indigenous peoples. The name Sadza is a generic term used to describe thickened porridge made out of any number of pulverized grains. The most common form of sadza is made with white maize meal.

Despite the fact that maize is actually an imported food crop to Zimbabwe, it has become the chief source of starch and carbohydrate and the most popular meal for indigenous peoples of Zimbabwe.

Several grains such as white corn mealie meal, bulrush millet, finger millet, rapoko meal, as well as millet meal can be used to make Sadza. These are named according to the various grains, to fully qualify it. For example, Sadza made from cornmeal is called sadza re chibage, when it is made from bulrush millet meal and rapoko meal, it is called sadza re mhunga and sadza re zviyo respectively.

Sadza, a starchy food, is eaten with an accompanying dish of either a meat based stew or some kind of vegetable. Generally Shona people will refer to a meal simply as sadza, without specifying the accompaniment. In this case the accompanying nyama or vegetable is assumed.

Traditionally, sadza is cooked in a clay or cast iron pot on an open fire. This environment presents significant challenges and requires the preparer to be seasoned, dynamic, creative and adaptive. Sadza, being at the epicenter of the Shona diet, mandates discussion of customary procedures, the tools required to prepare it and the accepted protocol for its respectful consumption. If you have a chance to witness an experienced sadza cook, do not pass up the opportunity.

Sadza is finger food, and it is quite an art! Wash your hands well in a bowl of clean water. Using your right hand (rudyi – ‘the one used to eat’) you partition a small chunk of sadza and mould it into a little round or oval ball of sadza called musuwa we sadza in your palm. Be careful not to burn yourself. Dip (seva) it in the soup (muto) and bite off and eat a sizeable chunk. Re-mould the remainder of your sadza in your palm and continue the process. Use your fingers to pick up and eat chunks of chicken or beef.

Sadza is normally shared by several people, all eating from the same plate and bowl sitting in a circle on the floor. This environment provides ample opportunity to learn sharing as one has to pace themselves accordingly while eating with others. It is particularly interesting to watch children of different ages eat from the same servings.

Some of the ingredients required to make traditional Zimbabwean Sadza (isitshwala) may include: 2 – 4 cups white mielie meal / corn meal / maize meal, water. To prepare the Sadza: 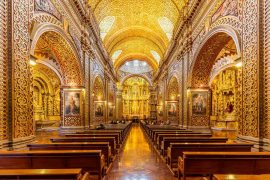