The campaign is to raise awareness about the Agenda of the Beijing Platform for Action and foster inter-generational exchange and dialogue to empower a new generation of women’s rights activists.

It demands equal pay, equal sharing of unpaid care and domestic work, an end to sexual harassment and all forms of violence against women and girls.

According to the UN Deputy Chief, “Nigeria has made important strides in areas addressing critical concerns identified at the 1995 Beijing Declaration and Platform for Action.”

The Beijing Declaration was a resolution adopted by the UN at the end of the Fourth World Conference on Women on 15th September 1995. The resolution was adopted to promulgate a set of principles concerning the equality of men and women.

Mohammed commended the UN and its entities for Gender Equality and Women empowerment. She said the UN Women is boldly pushing the agenda on Sustainable Development Goals, SDGs 5 which “is a prerequisite and enabler for a better world.”

“The quality and level of our education is critical to the generational equality agenda.

“Closing the gender parity gap in education, or at least 70 per cent of girls in Nigeria in attendance is an important achievement; however, less than 10 per cent are receiving tertiary education.

“It is after all, to this generation that we entrust the future of our commitments and future generations,” Mohammed said.

She added that the importance of safe, inclusive and resilient communities has been made abundantly clear by the COVID-19 pandemic.

She said that women have been on the medical frontlines, leading businesses, creating and providing critical palliatives and emergency support for vulnerable communities.

She said: “it is commendable that 12 states across Nigeria have already signed the national action plans on the UN Security Council resolution 1325”.

In his opening remarks, the UN Representative to Nigeria Edward Kallon called on Nigeria to find lasting solutions to issues that have to do with women and girls.

According to Kallon, “the life of a woman is not interchangeable and they need to be protected.”

Also speaking, the Minister of Women Affairs, Dame Pauline Tallen called on UN Women to increasing awareness and advocacy for an end to all forms of gender inequalities in Nigeria.

In her goodwill message, British High Commissioner to Nigeria, Catriona Laing expressed her sadness that Nigeria is being held back towards youth development.

According to her “It is sad to see how much is being held back in Nigeria. We are here to ensure that Nigerian youths achieve their goals.”

It takes many forms including stereotypes defining femininity and masculinity, men’s control of decision-making limiting women’s independence, and male disrespect of women which may result in violence. Violence against women affects women’s physical, mental, and reproductive health and families.

The Generation Equality campaign aims for a world in which men and women are paid equally and there is equal participation in political life and in decision making in all areas of life. This can help break the cycle of gender-based violence. 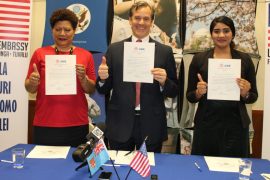 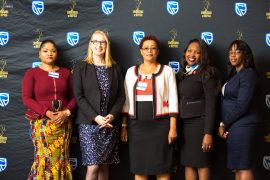 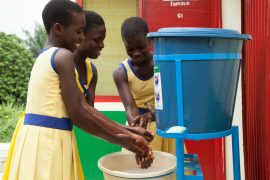