Asnath Mahapa was fascinated by planes as a teenager; little did she know she would break boundaries with them by becoming South Africa’s first African female pilot.

“It just dawned on me that those big things that we see in the skies, someone is actually in charge of them,” she told CNN. “I thought if someone can fly this thing that means I can also do it.” 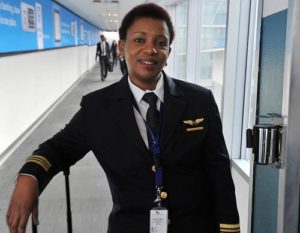 Mahapa, whose father didn’t want her to become a pilot, overcame a number of obstacles before she took to the skies.

“When I told my father I wanted to become a pilot, he never even entertained the idea,” she explained.

The Challenging Ride to Success

She enrolled for a course in electrical engineering at the University of Cape Town in line with her father’s wishes, only to drop out a year later. She later started flight school, which came with its own set of challenges.

“I was the only woman in my class the whole time,” she said. “I had to work very hard. I had to probably work ten times harder than the men that I was with in the classroom.”

Mahapa also felt sick the first few times she took to the skies. But that didn’t stop her.

“My first time, I felt sick,” she said. “I was persistent, I went back again, I went back until I stopped feeling sick.”

Her hard work and determination paid off and in 1998 she broke barriers by taking to the skies as the first female African pilot in South Africa.

“I didn’t know I was the first black woman, until about four years later. And I was still the only one at the time and I did not know,” she said.

“Before I knew it I was on TV, front page of newspapers, and that came as a shock because I was still young, I was 22 at the time, I was very young.”

Mahapa was not content with just breaking barriers, she wanted to train and inspire a new generation of pilots, so in 2012 she opened the African College of Aviation.

“For me, it’s about trying to help women who aspire to become pilots,” she said. “I still see a lot of black women going through the same things that I went through at that time. They still struggle to get jobs after they qualify.

“Most of them struggle with finances because it’s a very expensive industry.”

In addition to cost, according to Mahapa the field is still very male dominated, something she is committed to change.

“Girls can become anything they want”

“I don’t think there will ever be enough women in the industry,” she continued. “If I can change the world I would tell the girls go out there, do it and I will tell the boys there is nothing wrong with a girl becoming a pilot, becoming an astronaut for that matter.”

Despite the challenges Mahapa has no regrets about her decision to pursue a career in aviation.

“Ask any pilot, they’ll tell you, our view from our office is the best in the world, so why would you get bored doing a job like that?”