As a mechanic, Liqa’ El Khouly is challenging stereotypes in Egyptian culture, by pursuing a career in a male-dominated industry. She chats with our Niveen Ghoneim and takes us on the wild ride that has been her life so far.

Under Luxor’s scorching sun, Liqa’ El Khouly leaves the comfort of her house for a hard day’s work, goes back home, wakes up the next morning, and does it all over again – nothing out of the ordinary. In the unforgiving culture of Upper Egypt, however, it takes everything in a woman not to falter under the accusing eyes of the provincial townies of Esna. To them, her role in life is largely that of a uterus; she is not fit to handle the nuts and bolts of an automobile; she couldn’t possibly wrap her head around the mechanics of this intricate piece of heavy machinery.

Nine years ago, El Khouly discovered her true passion: fixing cars. “I love everything in a car; the engine, the body, everything,” she says. She would accompany her father to his auto repair shop where she learned the craft; she would join him every day after school to observe, learn, and try her hand at mechanics. Now the 20-year-old is an osta 2ad el donia (Egyptian colloquialism for ‘ace’); she can detect the malfunction ailing your car and fix it right up. It hasn’t been easy considering her XX chromosomes, which constitute an affliction in some cultures. “People would tell me ‘you’re a girl, you can’t lie under a car’, ‘you shouldn’t work’, ‘you deal with too many men’,” she recounts. “It didn’t faze me one bit, I kept going.”

Yet it wouldn’t be fair to say that it was her against the world since the people that matter to her the most have always stood by her side. “My family is very supportive of my decision; I don’t care what anybody else says, my father is always with me,” she says, gratifyingly. Many may slip into complacency after achieving success – for a case in point, look up Lindsay Lohan – but El Khouly is no dilettante. “I am constantly looking to evolve and develop my knowledge of mechanics, keeping myself up-to-date with the latest technological advancements in the field,” she says. Her fascination with mechanics is not an act of rebellion but rather a lifelong commitment she would happily forsake all else to pursue. “If I ever decide to get married, my husband would have to be okay with my job because it is not something I’m willing to give up that easily,” she says.

The silent co-conspirator against El Khouly and other like-minded female auto enthusiasts is Egypt’s vocational education system. “There are no mechanics departments for girls in our vocational schools,” she tells us. Lucky for her, her hands knew their way around a car long before her mind did; El Khouly learned in practice, so when she had the opportunity to enroll in a government training program, she had absolutely no problem keeping up with her male classmates.    The world doesn’t afford women much, but we do what we can with what we get, and El Khouly’s success is testament to that; but, for every successful woman, there are thousands who don’t make it. As with any persecuted group, basic human rights – such as entering a profession of your own choosing – comes at a steep price, a reality El Khouly is aware of despite having grown up in a somewhat progressive household. “A lot of women want to do what I do for a living but can’t because their parents won’t let them,” she says. 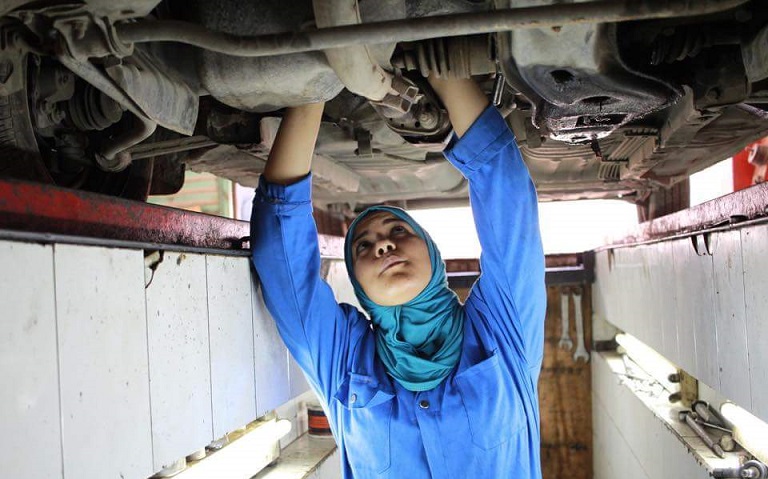 “I want to establish a training centre in Esna where young women can learn mechanics,” she says. As for herself, she doesn’t ask for much – a multi-million dollar car maintenance centre will do. “I wish to have my own business one day”. I want to establish a fully equipped state-of-the-art car maintenance centre and hire women; they wouldn’t have to slide under cars – I want there to be car lifts!” she says magnanimously. Times are changing, Egyptian women have come a long way since our pre-Hoda Shaarawi days, but a woman still needs her parents’ ‘blessings’ before she can pursue a career of her own volition. Women can fly planes, write books, devise nuclear weapons, and rack up Fields Medals, Nobel Prizes, Oscars, Grammys, etc., but we are somehow still stuck in that mental place where a girl needs her baba and mama’s permission before she can commit herself to a career choice only SHE has to live with for the rest of HER life. While that may not apply to El Khouly – her success is due in part to her parent’s support. This,  she says is why women don’t go into science and engineering, not because we are dumb, but because our choices are already made for us. Whoever designed our vocational education system probably thought to himself – I am going to take a wild guess here and venture that it was a ‘he’ – “would I let my daughter be a mechanic? No, so no mechanics department for girls!”

“Customs and traditions still dictate our lives here [in Upper Egypt], but things are slowly changing,” she says pensively.