When the space shuttle Endeavour blasted off on its second mission, it carried the first African American woman into space. But Mae Jemison was more than an astronaut – she’s also a physician, a Peace Corps volunteer, a teacher, and founder and president of two technology companies. Let’s take a look at this remarkable woman. 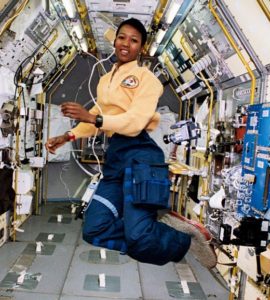 Born in Decatur, Ala., on Oct. 17, 1956, Mae Carol Jemison moved to Chicago, at the age of 3 and considers the city her hometown. The youngest of three children born to a maintenance worker and an elementary schoolteacher, she had a fascination with all things science from an early age. Once, after receiving an infection, she performed an extended experiment on pus. Jemison’s parents supported her desire to be a scientist.

“My parents were the best scientists I knew, because they were always asking questions,” Jemison said in a 2005 press release.

Jemison did well in high school, and attended Stanford University on scholarship at the age of 16. There, she attained her Bachelor of Science in Chemical Engineering and a Bachelor of Arts in African and African-American studies. She went on to earn her doctorate in medicine from Cornell University in 1981.

After working as a general practitioner, Jemison served two and a half years as a volunteer in the Peace Corps, spending time in the African countries of Sierra Leone and Liberia. In addition to English, she speaks Russian, Japanese, and Swahili.

Although employed as a general practitioner again following her return to the United States, Jemison decided to pursue a childhood dream. After the historic flight of Sally Ride, the first American woman in space, Jemison applied to NASA’s astronaut program, feeling that more opportunities had opened up. The explosion of the Challenger shuttle put a hold on applicants, but in 1987, she became one of the fifteen candidates selected out of more than 2,000 people. After a year of training, she became the first female African American astronaut.

On Sept. 12, 1992, Mae Jemison became the first African American woman in space when the space shuttle Endeavour carried her and six other astronauts on 126 orbits around the Earth. A mission specialist, Jemison was a co-investigator of two bone cell research experiments, one of 43 investigations that were done on mission STS-47. The shuttle landed at Kennedy Space Center in Florida on Sept. 20th. Over the course of her only off-planet voyage, Jemison logged 190 hours, 30 minutes, and 23 seconds in space.

Jemison left NASA in March 1993. She went on to teach at Dartmouth College. She also founded her own company, the Jemison Group, seeking to encourage a love of science in students and bring advanced technology around the world. She is a strong advocate for science, establishing an international science camp for high school students and working on the 100-Year Starship program.

According to Jemison “Never be limited by other people’s limited imaginations…If you adopt their attitudes, then the possibility won’t exist because you’ll have already shut it out … You can hear other people’s wisdom, but you’ve got to re-evaluate the world for yourself.” – At the Annual Biomedical Research Conference for Minority Students, November 2009.