June 1, 2017
Share on Facebook Share on Twitter Google+ Pinterest LinkedIn Tumblr Email
… As Mariya Tambuwal, First Lady of Sokoto State, Maintains Lead
On Tuesday, 6 June 2017, the on-going Amazons Watch Magazine’s Most-Impactful Governor’s Wife poll, which was designed to gauge the impact of the various pet projects and noble activities of the Wives of Governors of Nigeria’s 36 States, will close and the winner will be announced.
The online poll which was launched on Tuesday, 16 May 2017, is part of the magazine’s strategic efforts to celebrate the Wives of Nigerian State Governors, who are redefining the concept of sustainability in their communities and nation, demonstrating a commitment towards improving the social, economic and political status of Nigerian women.
Visit www.amazonswatchmagazine.com/polls/poll-who-is-nigerias-most-impactful-governors-wife to cast your vote, as search for winners continues
Wife of Sokoto State Governor, Mariya Tambuwal, is maintaining the lead with 78.2% of the total votes cast; Zainab Bagudu, Wife of Kebbi State Governor, sits at the second position with 10.1%; while the Wife of Lagos State Governor, Mrs. Bolanle Ambode is maintaining the third position with 7.6% of the votes cast, as at press time.
The magazine nominated 12 Nigerian State First Ladies in the poll, using popularity, impact and sustainability as criteria. The other 9 nominees up for voting are: Mrs Ebelechukwu Obiano of Anambra State; Mrs. Olufunso Amosun of Ogun State; Mrs. Rashida Bello of Kogi State; and Mrs Martha Udom Emmanuel of Akwa Ibom State.
Hajiya Ummi El Rufai of Kaduna State; Dr Lynda Ayade of Cross River State; Hon. JusticeEberechi Suzzette Wike of Rivers State; Mrs. Florence Ajimobi of Oyo State; and Mrs. Nkechi Okorocha of Imo State; are also on the list for voting. 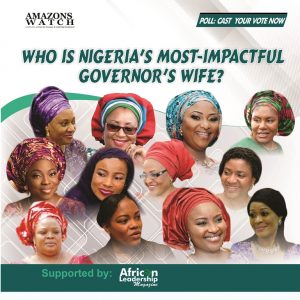 The Governor’s Wife to emerge winner of the poll will be celebrated with the Global Impact Leadership Award, for redefining the concept of sustainability in their communities and nation; working tirelessly to improve the social, economic, and political status of women in their communities, thereby making inroads for upcoming women into traditionally male-dominated spheres of the global economy.
The winner will also participate as panel discussant during the First Ladies on a Mission Session, a key highlight of the International Conference on Gender & Sustainability – New York 2017, an event being put together by the magazine at the margins of the 72nd United Nations General Assembly New York, on September 21, 2017, and also featured in an exclusive and extensive interview to be included in a special edition of the magazine that shall be circulated at the conference and to participants of the 72nd United Nations General Assembly, New York.
The Top 3, as well as the other nominees for the poll, will also receive a commendation award and invited to participate in the conference.
Post Views: 0

Who Is Nigeria’s Most-Impactful Governor’s Wife?