Sheila Dinotshe Tlou is a Botswana specialist in HIV/AIDS and women’s health, and a nursing educator. She was Minister of Health from 2004 to 2008.

Tlou graduated from Dillard University in 1974.  She studied at Teachers College, Columbia University, U.S., obtaining an M.A. in Education (concentrating in Curriculum and Instruction in the Health Sciences); she then took her PhD in community health nursing and a diploma in gender issues, at the University of Illinois at Chicago in 1990. She taught at the University of Botswana from 1980. From 1994 to 1996 she was head of Nursing Education, becoming an associate professor in 1999, and 2002–04 she was the university’s HIV/AIDS coordinator.

Professor Tlou represented Botswana at the 1995 Fourth World Conference on Women in Beijing. In 2002 she was appointed to a special UN task force on girls, women, and HIV/AIDS in southern Africa. She has also provided consultancy to UNAIDS, the UN Commission on the Status of Women and the World Health Organisation. She took part in the international community educator meetings for the HIV Vaccine Trials Network.

She has portrayed Precious Ramotswe, the heroine of Alexander McCall Smith’s #1 Ladies’ Detective Agency book series, in amateur theater productions, and at one time was mentioned in media reports as a possible choice to portray Mma Ramotswe in the Hollywood film adaptation currently in production.

Following the October 2004 general election, Tlou was appointed as Minister of Health on November 9, 2004. After being defeated in primary elections of the Botswana Democratic Party (BDP) in Palapye, Tlou was dismissed from the Cabinet on April 1, 2008, when Ian Khama took office as President. 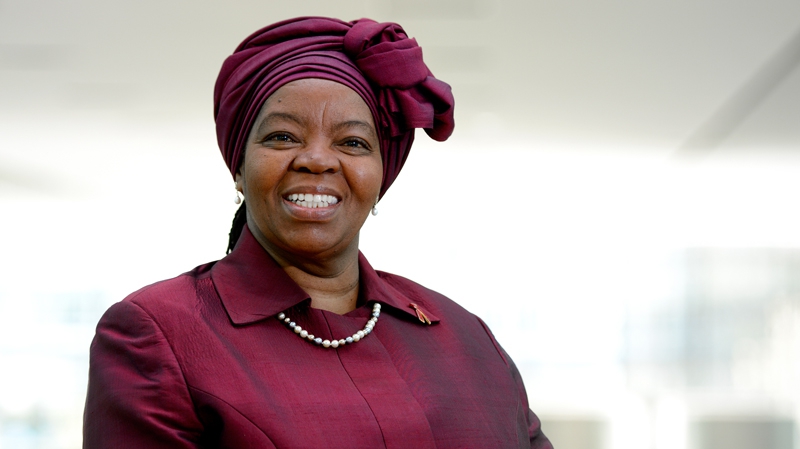 Much of Tlou’s work focuses on gender issues and HIV/AIDS in Southern Africa. Enabling women, particularly married women, in a patriarchal society to negotiate with their partner for safe sex has major consequences for HIV transmission. Tlou has worked with grassroots women’s organisations and national campaigns to increase AIDS awareness in Botswana. She has also done a great deal of work in reducing the stigma of AIDS and helping HIV positive people cope with their lives.

In 2014 she was awarded an Honorary degree by her alma mater. Tlou is married to Botswana historian Professor Thomas Tlou.