Chua Sock Koong is the Group Chief Executive Officer (CEO) of SingTel. She was the company’s Deputy Group CEO and Chief Financial Officer (CFO), a position she assumed in February 2006, before she took over Lee Hsien Yang’s CEO post in April 2007. 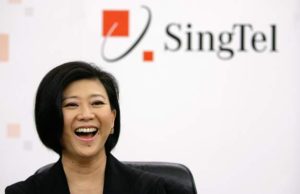 Previously as a CFO, Chua was responsible for all financial functions at SingTel, including treasury and risk management. Her assumption of this role was covered by Business Times (Singapore), which applauded her broad exposure across all areas of the business,” and noted her “significant role in SingTel’s major acquisitions, divestments and partnerships.”

Sock Koong joined Singtel in June 1989 as Treasurer before becoming CFO in April 1999. She held the positions of Group CFO and CEO, International from February 2006 to 12 October 2006, when she was appointed Deputy Group CEO.

She sits on the boards of Bharti Airtel Limited, Bharti Telecom Limited and key subsidiaries of the Singtel Group. She is also a member of the Singapore Management University Board of Trustees and the Public Service Commission.

Sock Koong holds a Bachelor of Accountancy (First Class Honours) from the University of Singapore. She is a Fellow Member of the Institute of Singapore Chartered Accountants and a CFA charterholder.

In a decade at the helm, Chua has grown Singtel into Southeast Asia’s largest telecommunications company, boasting $51 billion in market capitalization, and earnings of $2.8 billion last year—70% of which came from overseas operations. Working with volatile global currencies has not daunted Chua, a fitness aficionado, who is investing $1.8 billion in the two largest mobile operators in Thailand and India.

The astute technocrat has also made sizable investments in cybersecurity, hoping to capitalize on Singapore’s status as the most digital nation in the world. It is paying off: ICT (information communication and technology) revenue was up 18% in the first quarter of fiscal 2017, offsetting declines in the telecom’s consumer division, thanks to the September 2015, $810 million acquisition of US-based Trustwave.