An Indonesian woman arrested on suspicion of the murder of North Korea dictator Kim Jong-Un’s half-brother, Kim Jong-nam, in Malaysia was told she was taking part in a comedy TV show prank, Indonesia’s police chief has claimed.

Tito Karnavian said Siti Aisyah, 25, was paid to take part in a series of pranks that involved convincing men to close their eyes and then spraying them with water. She was reportedly told this was part of filming for a comedy TV show called “Just for Laughs”.

“Such an action was done three or four times and they were given a few dollars for it, and with the last target, Kim Jong Nam, allegedly there were dangerous materials in the sprayer,” Mr. Karnavian said.

“She was not aware that it was an assassination attempt by alleged foreign agents.”

Mr. Kim was killed at Kuala Lumpur airport on recently by what appeared to be two female assassins who sprayed him with an unknown poison.

Ms. Aisyah was arrested along with her boyfriend, who police said was not a suspect but had been detained in order to help them with their inquiries. Another woman, believed to be a Vietnamese national, is also in custody.

Mr. Karnavian’s claims echo those made by relatives of Ms. Aisyah, who said she had been hired to perform in a short comedy film and had travelled to China for the work.

Other family members said she had initially gone to Malaysia along with her then-husband and their young son in order to find work.

Ms Aisyah’s mother, Benah, said it was “impossible” her daughter was an assassin.

“My daughter is not like that, she is just a country girl”, she told the Sydney Morning Herald.

Inside the daily life in North Korea

The news comes as Malaysia warned it would not release Mr. Kim’s body to North Korea unless one of his relatives comes forward to provide a DNA sample.

Police warned that without DNA from a next of kin, they would refuse to hand over the body or release the autopsy report which could reveal the cause of death.

Selangor police chief Abdul Samah Mat told Agence France-Presse: “So far no family member or next of kin has come to identify or claim the body. We need a DNA sample of a family member to match the profile of the dead person.

“North Korea has submitted a request to claim the body but before we release the body we have to identify who the body belongs to.” 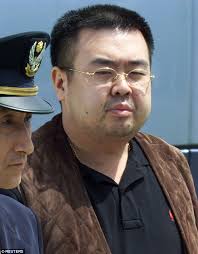 Mr. Kim died after he was attacked while waiting to board a flight to Macau.

South Korean authorities believe suspects sprayed or splashed a poisonous liquid into his face, causing him to collapse and die shortly afterwards on the way to hospital.

A post-mortem examination was carried out at a hospital in Kuala Lumpur on Wednesday despite objections from diplomats at the North Korean embassy.

It is not clear when the results will be made public.

Mr. Kim was estranged from his younger brother and lived with his wife and two children in Macau on the south coast of China. He had previously spoken out against his family’s dynastic control of North Korea.

A number of South Korean media reports had said two female suspects were believed to be North Korean agents working on behalf of Kim Jong-un, although this could not be confirmed.

It emerged that prior to his death, Mr. Kim had reportedly written a letter to his half-brother pleading with him to withdraw a standing order for his assassination, following an alleged attempt to kill him in 2012.