UAE’s leadership has an aim to raise the country’s ranking to one of the top 25 countries in the world for gender equality by the year 2021 through women’s empowerment initiatives, the vice-president of the UAE Gender Balance Council said on Tuesday.

Mona Ganem Al Merri, who is also the president of Dubai Women Establishment, said the UAE has emerged as a model for women’s empowerment due to the steadfast support provided by the country’s leadership in fostering an environment that provides women opportunities to actively contribute to national progress. 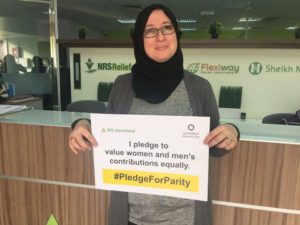 Supported by the country’s leadership, the achievements and successes of UAE women have furthered the country’s progress and development, she said.

“The UAE leadership has high aspirations for women since it believes they have the ability to play an influential role in the country’s resurgence in various fields,” she added, pointing out the significant progress made in the political and economic participation of Gulf women, which has inspired women across the world.

Al Merri made these comments at a meeting with a UN women delegation and in the presence of other UAE officials. The UN delegation praised the UAE’s exceptional achievements in women’s empowerment in the short period of time since its founding in 1971.

The meeting comes ahead of the October 17 opening of the UN Women Office in Abu Dhabi, which will serve as a liaison office for GCC countries.

Al Merri described the office as a crucial platform to promote cooperation between the UN and the countries of the region, including their various commissions and institutions, for women’s development and empowerment.

Al Merri highlighted the country’s major achievements in the field of women’s empowerment and gender balance, key among these being the political empowerment programme of President His Highness Shaikh Khalifa Bin Zayed Al Nahyan, which was launched in 2005.

She noted that the programme has achieved its objectives of expanding political participation, enhancing the role of women in the Federal National Council and empowering women across all fields.

Other key achievements Al Merri mentioned included the initiative to form the UAE Gender Balance Council aimed at enhancing the role of women as partners in building the future, and other initiatives dedicated to enhancing women’s active participation in various fields.

She also spoke of the exceptional support of Her Highness Shaikha Fatima Bint Mubarak, Chairwoman of the General Women’s Union, Supreme Chairwoman of the Family Development Foundation and President of the Supreme Council for Motherhood and Childhood and her commitment to enhance the status of women in the UAE and the Arab world through initiatives and projects that allow them to achieve the highest levels of participation in society.

The most important of these is the national strategy launched by Shaikha Fatima in March 2015 to empower women leaders in the country through 2021 as well as provide a framework for all federal and government institutions and civil society organisations to develop plans for women’s empowerment in all areas of sustainable development.

Al Merri said that the UAE Gender Balance Council is supporting the implementation of a Gender Balance Index which will provide a tangible measure of progress in women’s participation in various governmental commissions and institutions, apart from inspiring similar progress among private sector institutions.