Recently, Trump revoked the 2014 Fair Pay and Safe Workplaces order then-President Barack Obama put in place to ensure that companies with federal contracts comply with 14 labor and civil rights laws. The Fair Pay order was put in place after a 2010 Government Accountability Office investigation showed that companies with rampant violations were being awarded millions in federal contracts.

In an attempt to keep the worst violators from receiving taxpayer dollars, the Fair Pay order included two rules that impacted women workers: paycheck transparency and a ban on forced arbitration clauses for sexual harassment, sexual assault or discrimination claims.

“We have an executive order that essentially forces women to pay to keep companies in business that discriminate against them, with their own tax dollars,” said Farrell. “It’s an outrage.”

Out of the 50 worst wage-theft violators that GAO examined between 2005 and 2009, 60 percent had been awarded federal contracts after being penalized by the Department of Labor’s Wage and Hour Division. Similar violation rates were tracked through the Occupational Safety and Health Administration (OSHA) and the National Labor Relations Board.

But the research did not reveal much about sexual harassment or sexual assault claims. That’s because forced arbitration clauses — also sometimes called “cover-up clauses” by critics — are commonly used to keep sex discrimination claims out of the courts and off the public record.

“Arbitrations are private proceedings with secret filings and private attorneys, and they often help hide sexual harassment claims,” said Maya Raghu, Director of Workplace Equality at the National Women’s Law Center. “It can silence victims. They may feel afraid of coming forward because they might think they are the only one, or fear retaliation.”

Mandatory arbitration clauses are increasingly used in employment contracts, said Raghu, who added that banning the process was an important step forward for victims of workplace harassment or assault.

Many learned about forced arbitration clauses for the first time just last year through the Fox News sexual harassment case. Fox News anchor Gretchen Carlson dodged her own contract’s arbitration clause by directly suing former CEO Roger Ailes rather than the company. Ailes’ lawyers accused Carlson of breaching her contract, and pressed for the private arbitration to try to keep the story out of courts and the public record. 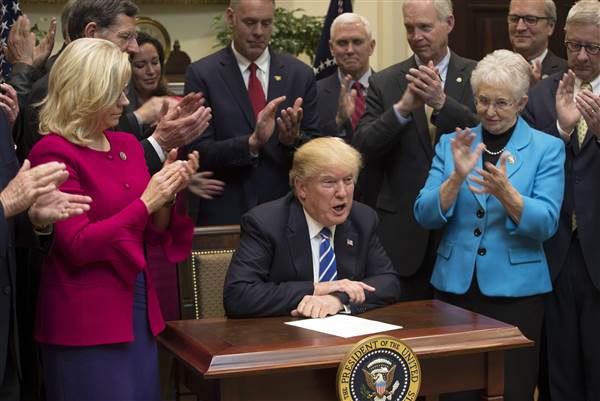 By overturning the Fair Pay order, Trump made it possible for businesses with federal contracts to continue forcing sexual harassment cases like Carlson’s into secret proceedings — where the public, and other employees, may never find out about rampant sex discrimination claims at a company.

The other result of Trump’s executive order on federal contractors was lifting a mandate on paycheck transparency, or requiring employers to detail earnings, pay scales, salaries, and other details. The Fair Pay order Trump overturned was one of the few ways to ensure companies were paying women workers equally to their male colleagues.

According to the Economic Policy Institute’s 2016 analysis of federal labor statistics, the median wage for U.S. women is about 16.8 percent less than the median for men — with women making about 83 cents to a man’s dollar. According to economist Elise Gould, that’s a gap that only increases as women become more educated and climb the corporate ladder.

“At the bottom, there’s just so far down women’s wages can go. They are protected by some degree by the minimum wage,” said Gould. “But as you move up, women are not occupying places at the top the way men are. The wage gap at the top is much larger.”

Wal-Mart is one example of how the wage gap works like an inverted pyramid. According to statistical data provided in Farrell’s class action lawsuit against Wal-Mart, women in lower-paying hourly jobs at the company made $1,100 less per year than men in the same jobs. But women with salaried positions were paid $14,500 less per year than their male coworkers.

The Fair Pay order made employers submit salary details to the government that would show massive wage gaps like Wal-Mart’s. It also made employers show overtime and deductions on paychecks so workers could make sure they were being paid exactly as they were supposed to.

The original class action case against Wal-Mart was dismissed by the Supreme Court. But Farrell told NBC News that Dukes v. Wal-Mart was a victory in its own right.

“The very public nature of that case prompted many changes by Wal-Mart including its pay and equity policies,” said Farrell of the law firm Equal Rights Advocates.

“No one, including workers at Wal-Mart, would have understood the issues in that case had there been forced arbitration clauses,” Farrell added, “Which would have kept all of those claims in secret.”

For the majority of workers, especially at low-wages, there isn’t an option to work around an arbitration clause the way that Carlson did with Fox News and Ailes.

“Unless you’re suing a deep-pocketed CEO, suing an individual for sexual harassment is not going to be the same as putting the employer on the hook for liability,” said Farrell. “You usually don’t get the same damages or results.”