The fascinating emergence of Theresa May as the Prime Minister of the Great Britain has essentially rekindled the hope of young women around the world with aspirations and dreams to contribute to the development of their local communities and countries. The world is evolving from an era where women are being subjugated with a bar to their status in the society.

The world over the recent years has witnessed the ascension of women to leading positions in the world. With Angela Merkel as the Chancellor of Germany, Erna Solberg as Prime Minister of Norway, Beata Maria Szydło as Prime Minister of Poland, Tsai Ing-wen as President of Taiwan, Park Geun-hye as President of South Korea, Bidhya Devi Bhandari as President of Nepal, and Liberian President Ellen Johnson Sirleaf as the first female African president, there is no doubting the confidence of the populace in the competence and character of female leaders as they continue to promote peace, security, growth and development in the world. 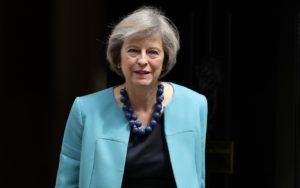 With the uncertainty that lies ahead of Britain, due to the recent referendum favouring the exit of the country from the European Union, on the shoulder of the 59-year old May rests the future of the Great Britain. May entered Parliament as MP of Maidenhead in 1997. May, who is known for her efforts on police reform and pursuing stricter drug and immigration policies, has been the longest-serving Home Secretary in 50 years under former Prime Minister David Cameron.

Following the resignation of Prime Minister David Cameron after the referendum, May announced her candidacy, and she receiving 50% of vote casts, among other candidates, to emerge front runner for the Conservative Party.

In a press conference, few days before her swearing-in, May opined “the need for strong, proven leadership to steer us (Britain) through what will be difficult and uncertain economic and political times. The need, of course, to negotiate the best deal for Britain in leaving the EU and to forge a new role for ourselves in the world. Brexit means Brexit. And we are going to make a success of it.”

May added that “second, we need to unite our country. And third, we need a strong, new positive vision for the future of our country. A vision of a country that works, not for the privileged few, but that works for every one of us. Because we’re going to give people more control over their lives. And that’s how, together, we will build a better Britain.”

On July 13, 2016, May was sworn in as Britain’s second female Prime Minister and the Queen’s 13th prime minister following ceremonial overtures. Having been sworn-in, May has positioned herself as a woman with the proven leadership and vision to lead Britain through Brexit.

To this end, May has set up a new department which is headed by David Davis, with the responsibility for Brexit. Liam Fox, former defence secretary, has been given the job of international trade minister, while Boris Johnson has been appointed foreign secretary. The men, who are skilled negotiators, have been charged with the role of negotiating with the EU ensuring best deal possible for Britain.