TWB, Africa’s first women bank incorporated in 2007 with a passion and commitment towards female entrepreneurs, empowering women economically and socially, polled 30.8% of the total votes cast; while First Bank, Nigeria’s largest financial services institution, established in 1894, which has over the years demonstrated commitment to promote women empowerment with women-supportive products, secured 23%.

Nigeria’s Bank of Industry (BOI) maintained the third position with 22% of the total votes cast; and the duo of Guaranty Trust Bank Plc (GTB) Nigeria and Diamond Bank Plc Nigeria sit at the fourth position with 10% at a tie. The Lift Above Poverty Organisation (LAPO), one of Nigeria’s largest microfinance bank, clung the fifth position with 6% of the votes cast.

The Amazons Watch Magazine launched the poll November 17 with the aim of recognizing and promoting the Top 5 Women Supportive Banks in Emerging Economies (Africa) with programmes and services that have significantly empowered women, increasing women’s access to financial services, improving the well-being of women, and bolstering gender equality, with notable impacts, transcending beyond the individual woman level to improvement in the standard of living in the continent.

The poll, which is one of the Magazine’s strategic public engagement tools, aimed at engendering healthy competition, peer review and promoting good women supportive financial services,  will be organized in four (4) phases across the regions of developing countries, beginning with the African region which has been concluded, followed by Asia, Middle-East, and then South-America. 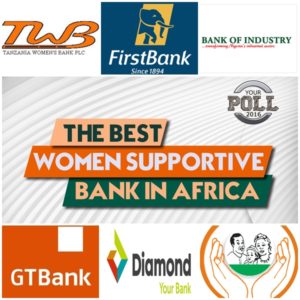 In announcing the polls, Mrs Furo Giami, the publisher of the Amazons Watch Magazine said the “essence of the poll is to bring to the consciousness of governments and key players of the private sector, the popularity and yearnings of women for women-supportive financial programmes and policies that supports female entrepreneurs and women empowerment. We hope we have achieved this aim”.

The leadership of the Top 5 Best Women Supportive Bank will be presented with the Most Outstanding African Women-Friendly Bank Award during one of the Magazine’s flagship event in the first quarter of 2017. Time, Venue and details of the event will be announced shortly.

A special publication of the Magazine will be unveiled at event to showcase women-supportive products and services of the banks and the impact in the lives of African women.

The Amazons Watch Magazine serves as the leading voice for women in developing Nations. The publication is rooted in the preservation of the pride and dignity of women through an objective reportage on gender inequalities and social injustices experienced by women in developing Nations, while profiling the amazing achievements of these Amazons for reference, duplication and inspiration to the next generation of women leaders.

The magazine is published by the Center for Economic and Leadership Development (CELD), a non-Governmental Organization in special consultative status with the United Nations Economic and Social Council (UN ECOSOC), whose mission is to become a leading global platform for delivering peak performance and gender empowerment.