Kenya will host the 12th edition of the Commonwealth Women’s Affairs Ministers Meeting (WAMM) in 2019.

This was announced at the conclusion of the 11th WAMM held in Apia, Samoa and attended by ministers, senior government officials, civil society members and development partner agencies from across the world.

Gender Cabinet Secretary Sicily Kariuki described it as an honour for Kenya to be selected to host the high level meeting.

“The Commonwealth Women’s Affairs Ministers’ Meeting speaks to the priorities of the Commonwealth and also to the global agenda for sustainable and inclusive development. Some of the key focus areas include gender equality and women’s rights in the period of the 2030 Agenda for Sustainable Development,” she said. 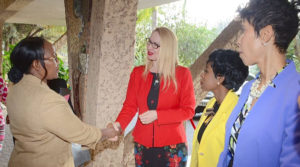 First held in 1985 and every three years thereafter, the meetings discuss issues around gender equality and women’s empowerment.

Kariuki stated that the WAMMs meeting are held to among other things, build consensus on Commonwealth issues, develop a unified position and informally exchange views outside of a negotiating forum.

“Our visit to Apia has been successful on two fronts; in the first instance we have had the opportunity to listen to and share our own experiences around gender equality and women empowerment issues – that has been hugely fulfilling,” she stated.

“But more importantly, we came here to lobby for the hosting of the 12th WAMM in Kenya and I am happy to report that we have succeeded in that objective. This is another win for the people of Kenya, affirming our place as global leaders in the hosting of international meetings.”

Speaking at the same meeting, the Commonwealth Secretary General Patricia Scotland said that unless the world paid particular attention to violence against women and girls, the world’s development goals wouldn’t be achieved.