Iranian sports authorities say they have banned five female billiards players from competing for a year for allegedly violating Islamic codes of conduct during a tournament in China.

The Iranian Billiards and Bowling Federation did not reveal the specific allegations, saying only that they would be announced at a later date.

“The female players who attended the China Open will be banned from participating in all domestic and international competitions for one year due to violations of Islamic principles,” the federation’s disciplinary committee said in a statement on March 30.

Iranian women are permitted to participate in a number of international sporting events, but must respect strict rules regarding Islamic dress at all times.

Iran enforces a dress code that requires women to cover their hair with the Islamic head scarf, or hijab, and enforces the measure through periodic crackdowns.

Female officials, athletes, and other national representatives are also required to respect the hijab guideline while traveling abroad.

In February, the Iranian National Chess Team banned 18-year-old Dorsa Derakhshani from domestic chess tournaments and the national team for appearing at a tournament in Gibraltar without a head scarf. Dorsa Derakhshani, who holds the title of International Master, has been living in Spain for more than two years, and playing without the hijab headscarf in chess games.

Since the 1979 revolution, Iran has required women to wear the Islamic headscarf in public.

The Islamic code also forbids women touching, dancing or singing with men outside their families.

Women are only allowed to show their face, hands and feet in public and are supposed to wear only modest colors. 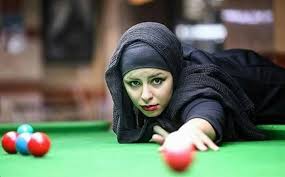 Over the years, however, women have pushed back the boundaries of the law, with many wearing loose, brightly colored headscarves far back on their heads.

T-shirts and jeans are banned for women attending billiard sport competitions, according to the website of the Iranian federation, which could not immediately be reached for comment.

Most pool-billiard clubs in Iran are male only but some offer women-only hours.

In October, Akram Mohammadi became the first Iranian woman ever to win a medal in a major billiard competition, taking bronze at the Asian championships in the United Arab Emirates.

She told the state-run Iran Online website after her victory that the World Pool-Billiard Association had not tried to restrict the wearing of headscarves at international competitions, unlike some other sports.

The reported ban comes less than two months after the Iranian chess federation announced possible disciplinary action against Dorsa Derakhshani and her brother for violating Islamic and political rules.

Dorsa’s teenage brother Borna was threatened with disciplinary action for competing against an opponent from Iran’s arch-foe Israel, which is forbidden by Tehran.

Source: The Times of Israel