India defeated Chile in the shoot-out in a pulsating contest to win the Women’s Hockey World League Round 2 and qualify for the World League Semi-final.

The match went into the shoot-out after both the teams were locked at 1-1 at the end of regulation time.

In the shootout, Indian goalkeeper Savita came up with a stunning display to help her side emerge winners.

Savita, who was adjudged the goalkeeper of the tournament, was outstanding under the bar as she denied scoring chances to Kim Jacob and Josefa Villalabeitia which gave India a head start in the shootout.

Skipper Rani Rampal and Monika converted their chances to give India a 2-0 lead in the shoot-out.

Chile’s Carolina Garcia then scored from their third attempt, but Deepika found the net to seal the match for India.

Despite conceding an early goal in the fifth minute when Maria Maldonado scored for Chile, the Indian eves stayed upbeat in their pursuit for the title.

The Indians came up with good defensive structure to keep Chile from scoring again.

Though India earned their first penalty corner in the 22nd minute, the effort was saved by Chile goalkeeper Claudia Schuler.

Chile continued to stay in lead until the third quarter when Anupa Barla successfully converted a penalty corner in the 41st minute to level the scores. 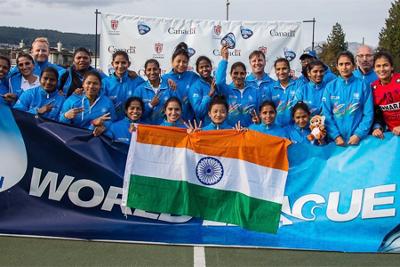 The fourth quarter saw both the teams press hard for goals and Indian striker Rani came close to converting a field goal in the dying minute of the match but her strong backhand shot was saved by Claudia.

“It was a very good match and we are happy with the way we played. Chile was a tough side to beat and we really had to keep ourselves motivated to keep pushing for a goal after they took an early lead.

“It was a challenging tournament for us with difficult weather conditions as it rained for a few days but we are extremely thrilled that we are through to the World League Semi-Final,” said India skipper Rani after winning the final.

Source: The Times of India