Getting men to be active fathers may not seem the most obvious way to tackle gender-based violence. But, according to Gary Barker, CEO and founder of Promundo, who engages men and boys in ending violence against women and girls, policies that encourage men to do more unpaid care work are a vital part of achieving gender equality.

“To us, it seemed obvious that we needed to figure out more constructive ways to engage men on this topic,” he says.

In fact, there can be consequences when men aren’t brought into initiatives to empower women.

According to Barker, while in the long-term, women who are better off financially are less likely to be involved in a violent relationship and more likely to leave a violent partner, in the short-term, the opposite can be true. Micro-credit programmes that target women, for example, can initially lead to an increase in violence.

“[Her partner] may be feeling economically disempowered, the power dynamic feels like it’s shifting … and in some settings and some relationships, men might not be ready for that,” Barker explains.

To tackle this in Brazil, Promundo runs a companion project to the government’s bolsa familia cash transfer programme, which for more than a decade has given cash to families living in poverty in return for enrolling their children in school and attending regular health checks.

Bolsa familia reaches nearly a quarter of the country’s population, and 93% of its beneficiaries are women. Promundo’s companion project trained public sector staff to discuss gender equality and the importance of sharing care work when administering bolsa familia grants.

The project seems to be working. At the start, 75% of male participants said men’s responsibilities included childcare, by the end, 100% agreed.

Promundo, which works in more than 20 countries and receives funding from foundations and government sources, including the US Centers for Disease Control and Prevention (CDC) and the World Bank, also recently successfully campaigned for Brazil to increase entitlement to paternity leave – one of few policy examples promoting men’s involvement in care work. Men are now able to take 20 days of paid parental leave, as opposed to the previous five.

Barker had campaigned for more paternity leave in Brazil in 2007, but failed because too many employers did not want to provide this extra benefit to staff. He was also told by women’s rights organisations that mothers did not believe their partners were ready to care for their children.

Barker hopes the country becoming one of only a handful in the global south to offer paid leave for fathers will begin closing the huge gap between men and women in time spent on caregiving. Combined with better policies around education and psychosocial support, he hopes it will also reduce levels of gender-based violence.

According to the annual Map of Violence, in 2015 a woman was killed every two hours in Brazil.

Whereas Brazilian women spend 22 hours a week, on average, on care and domestic work, men only spend 10 hours and eight minutes, according to Promundo’s 2015 State of the World’s Fathers report.

The key, Barker says, will be scaling up work to engage men from small-scale projects at community level to become a more mainstream part of government policy and development programmes. “There’s a growing amount of evidence that if we can do this long enough and deep enough, and with enough key actors, we can see change. But they’ve been in limited areas – five schools, four provinces in a country,” he says. 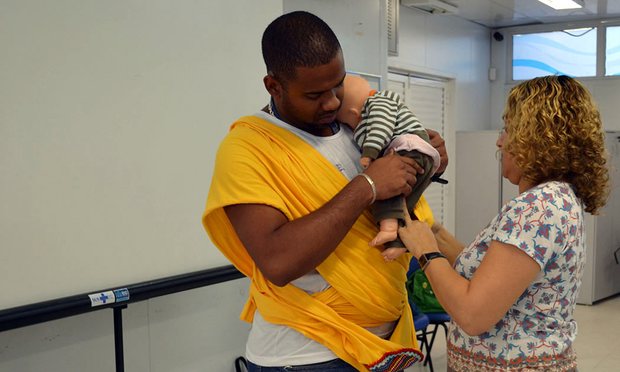 His views are shared by a number of women’s and girls’ rights organisations. According to Kerry Smith, head of girls’ rights and youth at Plan International UK, who works with men and boys to prevent female genital mutilation and child marriage: “If you want to address stereotypes of what women and girls are, you absolutely need to address stereotypes that men have to operate under as well.

“In our minds, it isn’t the most important element, it isn’t the only element, but it is an essential ingredient of tackling and ending violence against women and girls. You need to look at it in a public health way. You need to treat and respond to the actual violence and you also need to take preventative measures, both of which need funding.”

Toral Pattni, Care International’s senior humanitarian adviser for gender, acknowledges that in the context of limited funds, the balance between work with men and boys and protecting women who have experienced violence is “something many organisations struggle with. But if we are simply responding to the need but not tackling, not preventing it, then we are only ever going to be responding to the need.”

Barker believes it’s time to assess how much it would cost to engage more men. “It’s a really key moment to now say how much would it cost to scale this up … and to build it in to other streams of funding. To say, what does it cost to [engage men] in what you’re already doing?”